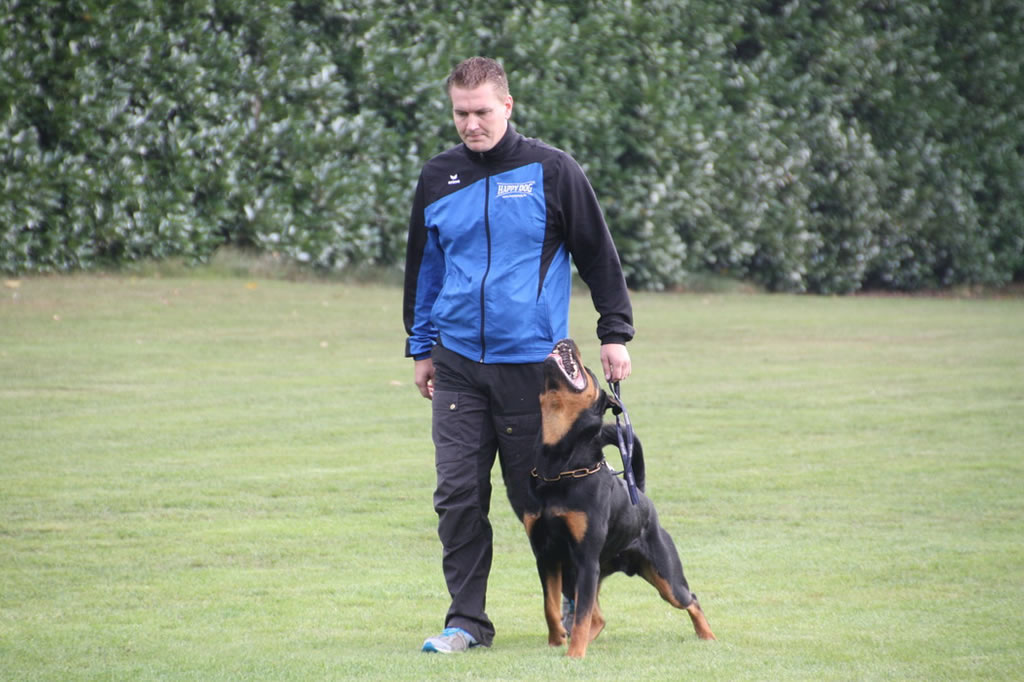 Richard Adams is 36 years old and lives in Roosendaal (the Netherlands). He is married to Mirjam Adams and they have a young son Thijs Adams. Richard and Mirjam have their own company in installation work in buildings and homes. Richard´s current dog is Finn vom Erpenstein, who was born in the kennel of Rob and Amanda van Erp in 2012.

Richard, I cannot start our interview without congratulating you on your IFR World Champion title 2017 🙂 You have achieved this title with Finn vom Erpenstein, who is five years old now. I cannot remember you two on the competition field, is this your first great success together?

This is indeed our greatest success. Finn and I have first done the selection trails before the IFR WCH and we have won all of them. After the IFR, we have also won the Dutch Championship this year.

What was your journey to this year´s success? How many exams, national trials etc. have you already participated in?

Finn and I participated in four big competitions this year and we won all of them. Finn has done a total of 12 trials and exams till now. I have done about 50 trials and exams with different dogs in my dog sports career.

I started my training with Finn when he was an 8-week-old puppy. I start the puppy training with learning technique, and this counts for tracking, obedience and protection. Of course, I train in a team. You cannot achieve anything without people that help you.

Is Finn your first Rottweiler? What dogs did you have in the past and what were your activities or achievements? 🙂

Finn is my third Rottweiler. I competed at several trials with my first Rottweiler “Diesel”. We also went to the IFR WCH twice, but unfortunately we did not have such success as with Finn. I also have trained German Shepherds with difference in success, from BH to small IPO3 trials.

What do you like about the Rottweilers and why did you choose this breed?

I love their strength. I love dogs with a big heart (strong character), unfortunately that’s no standard in any breed.

It is said that to train a Rottweiler is somehow more difficult than to train a Malinois or a German Shepherd Dog. What is your opinion and your own experience regarding that?

It is true that Rottweilers are harder to train than German Shepherds or Malinois. I train in a German Shepherd club and you often see that things with a GSD are easier to learn/teach.

Questionable Phenotypic in the Rottweiler

Controversy has broken out among Rottweiler fans. Differences of opinion between breeders across the world are becoming increasingly evident.

Would you change a Rottweiler to some other working breed? Which one would you choose, if you would have to make such decision?

As I mentioned earlier, I also trained with German Shepherds. I will probably also work with them again in the future.

We, who own and love Rottweilers, know how great and sweet dogs they are. However, they need to be handled correctly, consistently and with love. What is opinion of other people on the Rottweilers in the Netherlands?

The Rottweilers in the Netherlands have sometimes been taken negatively by public. People buy this breed because they like its appearance, but they forget about the character traits of those dogs. In my opinion, this is where the problems begin. Same can be said about many breeds in Holland.

Richard, back to the IFR Championship! 🙂 What were your expectations when you were leaving to the IFR?

My expectations were to finish within the top 10. My goal went to plan, I can say. 🙂

Would you participate in a trial you have entered, even if something went wrong just before the competition and you would know that some exercises probably would not go to plan? Are you competitive and not afraid to take risks? I mean, in general, not only in dog sport, where such risks aren´t usually worth it… 😉

I always train on the edge so I always count on some risk. If you want to win, you have to take the risks. I’m always competitive in everything, but I am trying to keep it a little bit under control, because it’s not always nice/easy for other people. 🙂

Could you please describe each phase at the IFR from your point of view? What went to plan? Where did you expect a better score and where did Finn surprise you? Whether positively or less pleasantly ;-).

My training sessions for tracking are little bit different for long or short grass and the dirt. I had prepared my dog for long grass, but by the start of the IFR WCH it turned out that the fields were mowed. So tracking was done on short grass. Due to our wrong preparation we lost 6 points on the last corner. We were awarded 93 points for tracking and this score was fortunately sufficient for us to become the winners. Obedience and protection went according to plan. 🙂

Were you nervous? How do you cope with trial nerves?

Yes, I was very nervous. I am always nervous during the competitions, but I am trying to use my routine to control it.

What are you thinking about when you are on the competition field? Do you fully concentrate on your dog, or do you also notice what is happening around on the field and on the grandstand?

I am fully concentrated. I do not notice anything from the grandstand or what is going on around the field.

What was it like to watch rest of the performances as a spectator after finishing all your phases where you did really well and hope that you would finish on the podium? 🙂

When you finish your performance, rest of the competition is not in your hands anymore. Therefore the best thing you can do, is to enjoy performances of other competitors and hope that your one was good enough. 🙂

What were your emotions when you found out you won the IFR Championship? How did you enjoy it on the podium? 🙂

For me, it was unreal to become the World Champion. I fully realized it about a week later after our success. Of course, I liked it on the podium very much. But I have to say that the positive reactions of the spectators were the most beautiful moments for me that weekend. 🙂

Richard, what is Finn like? I mean his character – what do you like most about him and are there any character traits that you would change a little bit?

Finn is not an easy dog to train. He has strong will of his own and he often thinks he doesn´t need anyone next to him. Everything would be much easier if he would cooperate more with me. On the other hand, that is what makes him special.

Which IPO phases are your favourite? I suppose that Finn prefers protection, but what about you? Actually, how often do you train a week?

I usually train small things every day and sometimes I add extra exercise if needed. I train three or four times a week at our club. My favourite part to watch is obedience and I love training protection.

What kind of motivation and treats do you use?

I use everything that my dogs are willing to work for. I use both food and toys in my training.

Why did you choose Finn as a puppy and why from “vom Erpenstein” kennel?

Finn was the only male puppy from the litter so I couldn´t pick. I knew Finn’s mother and that was why I had decided to choose this kennel.

I live on the Belgian border, so I am familiar with the country. I have many Belgian friends. There are also some people from Belgium training at our club. My wife Mirjam, my good friend Corne and my friends from our club went to Belgium to support us. They organized a surprise party for me after the IFR and it was really incredible.

What is your favourite music and for example food? 😉

I love almost all kinds of music. Same can be said regarding food.

Could you, please ask Mirjam to characterize you? Mirjam, what is Richard like as a husband? What is it like to live with the IFR World Champion 2017? 🙂

Richard is a loving husband and a father. He lives for the dog sports. Fortunately, we both have given our heart to this sport. Energy and all time spent on the field that we (Richard and our family) have put into Finn’s training, have resulted in their World Champion title. When our son told Richard: “Dad, you made history!” it made me as his wife so …freaking proud!!! 🙂

Richard, what are your plans for the future with Finn?

I hope that Finn stays healthy and fit so that we can be back on track again next year.

Do you have any message or a credo that you would like to share with our readers?

Just a few words, as you can see I am not a “writer”. 🙂 If the plan does not work, change the plan but never the goal! Enjoy your dog and your training!

Thank you very much for the interview and I wish you best of luck in training and future competitions. 🙂