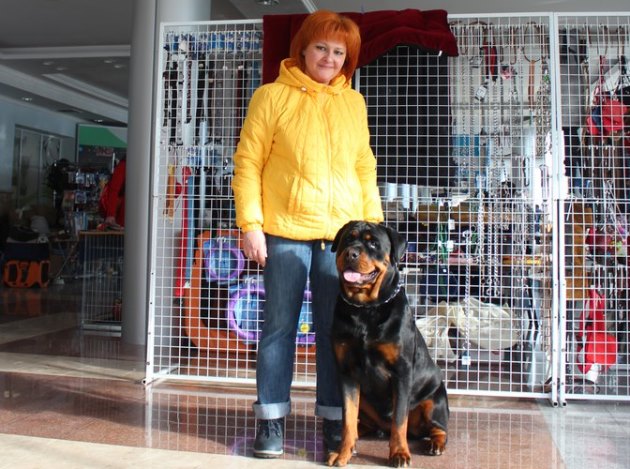 Dangerous, aggressive and evil creatures that bite everything that moves, and that which does not move, they move and bite. This is a fairly common opinion about rottweilers. In fact, these beautiful, strong in spirit and body dogs, with the right approach, become real guards of their family. We talked about the history, character and myths with which the breed is shrouded, with Natalya Shashkova, a breeder whose pupils boast of excellent exterior qualities.

Natalya, let’s talk about the formation of the breed at the beginning of our interview: are the Rottweilers from which country, who are called their ancestors?

Honestly, there are very few primary sources on this subject. It is believed that the ancestors of the Rottweilers were shepherd dogs of ancient Rome. When his leaders decided to conquer Europe, along with the army they sent dogs on the road, which performed a protective function. And not in vain, because they were distinguished by great endurance and willingness to fight in battle until the end.

When the conquerors began to settle in European countries – France, Germany, Sweden – their dogs began to cross with the four-legged animals there. Actually, this served the emergence of new breeds, including Rottweilers. Their homeland is Germany, the city of Rottweil.

The settlement itself got its name thanks to excavations found during excavations in 700 AD. On its territory fragments of a mosaic were dug. «Rote Wеil» in translation means «red tile». Here, in honor of the finds, the city was named, and then the breed of dogs – Rottweilers.

In preparation for our interview, we learned that the Rottweilers are also called butcher dogs. It seems like this name is also associated with the history of the breed. Maybe you know something about this?

Yes, they were really called that. The fact is that the city of Rottweil was in a very good place – at the intersection of trade roads. Cattle breeders came there to fairs, and along with them took dogs – the then Rottweilers. They well protected both their owners and the money that they earned. But the butchers harnessed some dogs to carts loaded with meat. That is why the ancestors of modern Rottweilers were called butcher dogs. And quite a while, until the German authorities banned the transport of meat on city roads, offering railroads as an alternative.

By the way, the dogs were then kept exclusively for work, and this ban left them without it. This led to the fact that at some point the number of the then Rottweilers sharply decreased.

How was this problem solved?

It is believed that interest in the Rottweilers increased by chance when, thanks to these dogs, they managed to disperse the crowd of raging sailors. After that, in Germany, these animals began to be used by the police.

And to increase the number of livestock, then clubs of breed lovers united in the «United German Rottweiler Club», which exists today. His enthusiasts found the necessary animals for breeding and approved the breed standard. Thanks to them, today there are Rottweilers in their modern look.

And how did the Rottweilers get into our country?

Initially, they were brought to Russia at the beginning of the last century to protect elk herds. Dogs adapted quite well to the conditions of Russian frosts, but there was no continuation of the breed within the framework of then-Russia.

The second time, the Rottweilers were brought immediately after the Second World War to the Soviet Union – dogs were needed to breed the Black Russian Terrier. In addition to the Rottweilers, the Airedale Terriers and Giant Schnauzers also took part in the formation of the Soviet breed.

Somewhere in the middle of the twentieth century, the entire population of Soviet Rottweilers was concentrated in military and departmental nurseries. But ordinary breed lovers learned about them, so some puppies ended up in the families of Soviet citizens. And in the 80s they “leaked” to Ukraine.

Let’s talk about the appearance of the breed. Perfect in its exterior qualities a rottweiler – what is it?

As written in the FCI standard, the entire look of Rottweilers speaks of great strength, agility and endurance. Actually, this is what its main exterior qualities testify to: a powerful neck with good muscles, well-developed cheekbones, a pronounced transition from the forehead to the nose, wide chest, strong legs and black coat with a brown-red tan.

It so happened that the word «rottweiler» in some people causes negative associations, they say, such a dog has a bad character, it is unpredictable and aggressive. What is the reason for this? After all, it has long been known that even a harmless beagle who was improperly raised can become aggressive and even evil.

Indeed, it so happened that if we are talking about «killer dogs», then we are talking primarily about rottweilers. They are really very complex, strong and even scary creatures somewhere. But if we look at the statistics of people’s bites by dog ​​breeds, we will see that a friendly and cheerful American cocker spaniel grabs the trouser leg by ten times more often than a rottweiler.

At the same time, of course, one should not ignore the concepts of education and socialization of animals. Without them, not only the Rottweiler, but also the representative of any other breed will become alienated and even aggressive towards people. Therefore, talking about excessive anger is not necessary here – it all depends on the owner’s attitude to the pet, on whether he was engaged in his upbringing in principle.

Yes, but at the same time there is an opinion that Rottweilers are forbidden for breeding and keeping in some cities of the world, or is this not just a myth, is it true?

They are banned from entry into Israel. But the ban on maintenance takes place in the military camps of the US Army and applies not only to the Rottweilers, but also to other dogs of large breeds. But this is not an indicator of the danger of the Rottweilers. For example, in Denmark, the import, sale and breeding of Caucasian shepherds, American bulldogs, Alabaevs and several other dogs are prohibited. In Germany, you can not keep English and Staffordshire terriers. In other countries of Europe and America, other lists of prohibited breeds exist.

Natalya, please tell us about the nature of the Rottweilers. What is he like? What do such dogs like and can’t even hate? American Akites, for example, do not get along with other breeds. Maybe the Rottweilers have some features of a similar plan?

In my opinion, the main thing that Rottweilers simply do not tolerate is boring training. They do not like to repeat the same command a hundred times. No, they understand her, but refuse to do it many times in a row. They need a variety and a lot of physical activity. In the end, their love of work is in their blood. We have already talked about this today. The ancestors of the Rottweilers were excellent shepherds and coped well with security duties. This does not mean that you need to start a herd in order to entertain the pet, it just needs and it is important to be busy.

On this occasion, we have the following question: what physical activity is necessary to provide a rottweiler? In other words, how often and for a long time you need to walk with him to satisfy the need for employment and activity?

It is really very important to pay attention to the Rottweiler and accompany the walks with physical exercises, because the level of his intelligence is directly related to his physical development. Therefore, daily walks lasting from 3 hours a day are a prerequisite for maintaining a Rottweiler, especially if he lives in an apartment.

By the way, the content of this breed will be our next question: there is an opinion that a Rottweiler cannot exist in an apartment – is that so?

Many people think that keeping a Rottweiler in “apartment” conditions is a difficult and troublesome event, but it’s not. The representative of this breed is a bodyguard dog, so he should always be next to the owner. And this is possible only if the pet lives together with the owner. And if you pay due attention to the physical activities of the animal, do not ignore the need for long walks, then the problems associated with living Rottweiler in the apartment will not arise.

And what do you need to pay attention to grow a complaisant and kind friend in the person of a Rottweiler?

In my opinion, in order to find a common language with such a dog, first of all, the owner needs to pay attention to the tactics of behavior with the pet. You will have to work hard, showing two qualities of character that seem to be opposite – firmness and flexibility. Without the first, you cannot convince the Rottweiler that you are the main one. Without the second, it is impossible to achieve results in education and training.

It will be necessary to catch the pet’s mood, understand its readiness to hear commands and execute them at the given moment, look for ways to attract attention and obedience to the animal, referring to its character traits. This is precisely the flexibility of communication with the Rottweiler. Only after gaining complete mutual understanding, you can get the perfect friend in the face of such a dog.

Your answer of yours served the appearance of another question that will be final: in your opinion, who should not start Rottweilers?

I think those who had no dogs before the Rottweilers, i.e. newcomers. The nature of the representatives of our breed is strong-willed, strong, somewhere even stubborn, because anyone who does not have experience with dogs can hardly pacify the Rottweiler. This is the first.

The second one. As we have said, the rottweiler needs constant physical activity. Busy people are unlikely to be able to provide him. Therefore, in this case, I would not recommend to start such a dog either.

And, probably, for families with small children, the Rottweiler is also unlikely to be suitable. No, of course, he will be very kind and tender to your child, guarding him, but he is unlikely to tolerate tugging at his tail and trying to pick his eyes out. Although if you instill respect for animals in your child from childhood, you cannot explain that you cannot torture a four-legged family member, then the contents of the Rottweiler will not be the result of all kinds of misunderstandings.

Such dogs respect their owners and need the same feeling in relation to themselves. If you follow this simple rule, you will find a truly faithful and complaisant friend in the person of the Rottweiler.